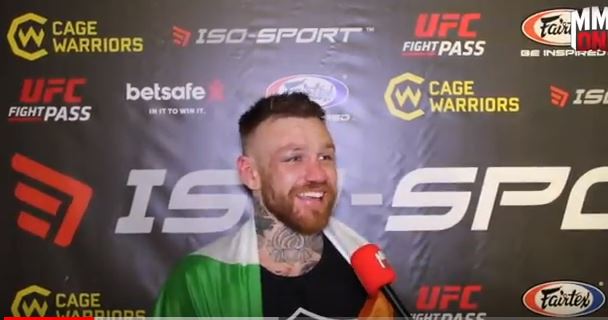 SBG Portarlington’s Head Couch Philip Mulpeter is getting the chance to bring his career to the next level with a massive fight that will take place before the end of the year.

The UK-based company, which is one of Europe’s leading mixed martial arts organisations, is billing the event as the biggest in its history. It will take place at the Ice Arena in Cardiff on Saturday, 8 December.

One of Ireland’s most highly-respected professional MMA fighters, Mulpeter was part of a crop of rising prospects that included team-mates such as Conor McGregor, Cathal Pendred, Aisling Daly, Paddy Holohan and Artem Lobov.

After a three-year hiatus from competing, ‘The Honeybadger’ made his comeback last December. An impressive win over durable veteran Ali Arish was followed by a big statement in June, when he returned to Cage Warriors with a third-round submission of hometown favourite Jan Quaeyhaegens in Antwerp, Belgium.