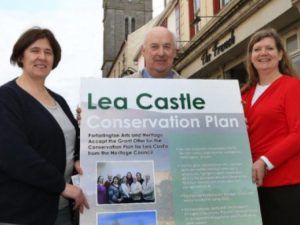 In 2014 a meeting was held in the Portarlington Community Centre to discuss the Heritage Council Offer of a grant to begin the process of preparing a  Conservation Plan for Lea Castle.  The Portarlington Arts and Heritage welcomed everyone to the meeting and described the current status of Lea Castle, the fact that a grant has been offered to prepare a conservation report on the structure, and the opportunity that this presents for the future development of the castle.  They outlined what had happened at nearby Coolbanagher Castle, which was destroyed by the violent storms that year, and stated that this presents a strong case for safeguarding Lea castle for the future. As stated  it is imperative that people respect that Lea Castle is on private land, is not open to the public, and is not safe for people to visit.  A conservation Architect spoke about the history and the importance of Lea Castle drawing comparisons to the Anglo Norman Castle in Carlow.  Ross McNamara, architect, spoke of the potential for a digital approach to the project. Innovative 3D and virtual reality technology could be used as  part of the development process and some of that technology would be available free online.  Martin Dalton, conservation architect, spoke of the importance of Lea Castle from both an architectural and archaeological perspective.  P.J. Goode, local historian and author, spoke of the wider area of Lea and its historical importance. Catherine Casey Heritage Officer of Laois County Council gave a brief outline of what a Conservation Plan is, and showed the meeting a report which has been prepared for the Rahan Monastic Site outside of Tullamore, citing it as a good example. There were a number of questions and answers from the floor. The possibility of developing the tourism potential of Lea Castle in conjunction with the Derryounce Lake project was put forward as an idea.