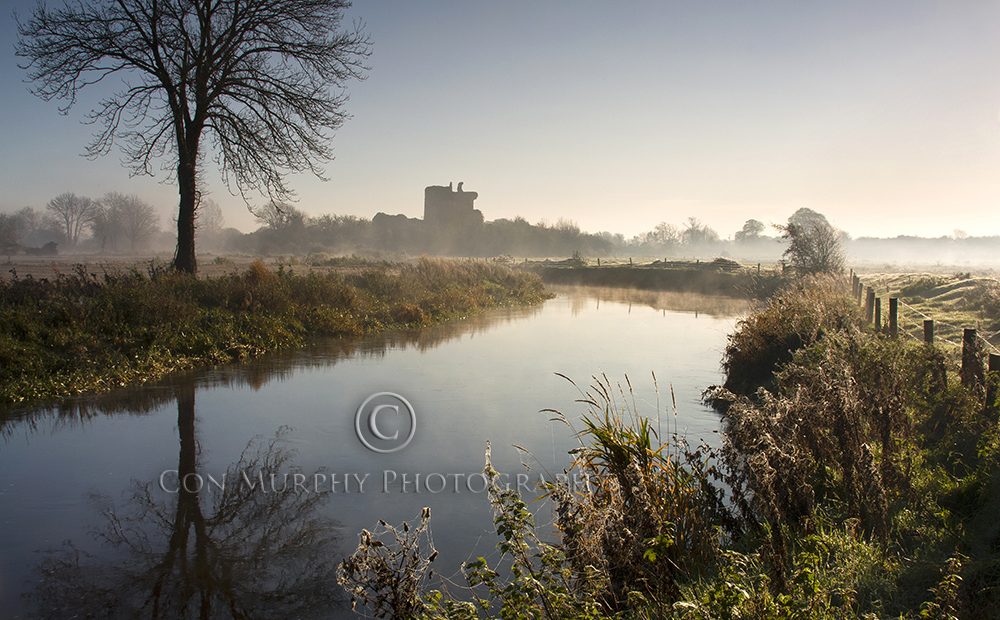 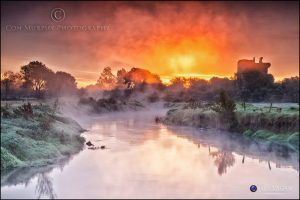 The history of Lea Castle concerning its original construction is somewhat vague. It has long been held that Earl William Marshall built the original form of the castle but recent researchers suggest that the Baron of Offaly, Gerald fitz Maurice was responsible for the original earthen structure. This was likely to have been a motte and bailey structure, in place by 1203. The first phase of stone work, likely to be the bailey wall surrounding the original earthen structure, was likely built by Meiler fitz Henry. The present keep is located on a rise which is likely to be this original motte structure. The castle is ideally situated for trade and defence along the river Barrow.

By 1284 the O’Dempseys had attacked and burned the castle at which point it was rebuilt by deVesey and handed over to the king. In 1307 the castle and nearby town were destroyed and rebuilt again. The nearby church was built at this time and destroyed in 1315 by the Scots under deBruce. The next 150 years prove to be extremely turbulent and the castle is sacked and captured four times by the O’Dempseys who finally lost control of the castle in 1452. They regained control again in 1460 and it stayed in Irish hands until the early 16th century. The castle continued to change hands until 1650 when it was destroyed by parliament forces. It is probably at this point that the majority of the destruction that we see at the site today was caused. It was, however, in poor condition prior to this. In the early 18th century the O’Dempseys stabled horses here until the castle was rented from the Bishop of Down by Hector Graham who lived there until 1737. He handed the lease to the Evans family who owned the castle until the 20th century. Graham was the last known person to live in the castle (probably the gatehouse area) and the Evans family lived in the nearby manor house. The castle was offered to the state by a relative of the Evans family in 1923. This offer was not accepted. The castle is now in the hands of the local Callanan family.

As to the physical remains of the castle there is a central four-towered keep with two underground vaults with well-preserved plank centering. Only one tower remains in-situ along with the partial remains of a second which is close to collapse. A mural-staircase runs through the thickness of the wall leading to a second level. Other stairs are located higher up in the remaining tower but these can no longer be accessed. A staircase leads underneath the castle level but this collapsed about 20 years ago. This main area is located on the site of the original motte and is elevated above the level of the surrounding landscape. One decorated window remains in the North wall. These remains are 13th century in date. The entire site of the castle is surrounded by a bailey or bawn wall. There is a very pronounced base batter on this wall although in many places it has eroded away due to river flooding. The wall changes thickness on its Eastern edge which may suggest a different phase of construction or partial rebuilding at some point. Early maps of Lea Castle show corner towers on this wall but these are no longer present. The interior of this area is extremely overgrown and cannot be entered with ease. The entrance to the castle is located on the Southern side of the site and was originally accessed across a bridge of which little remains. The groove for the portcullis still remains.

This is the area where Hector Graham lived and is the most modified with the addition of a square tower. Directly adjacent to this area, to the West, is a second entrance with two circular towers either side. This led to an entrance in an inner wall, complete with stairs to a walk-walk, which, in-turn, led to the keep area. Throughout the castle there is evidence of wicker-centering and plaster is still visible in many areas, although this may be associated with later occupations of the castle. Around the site are various earthworks including the silted-up moat and medieval fishponds.

*The above history and description is derived from information contained in the Preliminary Report of Lea Castle notably information provided by Dr. Karen Dempsey and P.J. Goode. Also consulted is an unpublished paper by Dr. Dempsey and an article from TheStandingStone.ie by Dr. Thomas P. Nelligan.