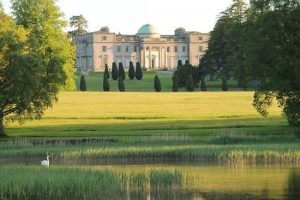 The large neo-classical mansion of Emo Court is arguably one of Laois’ most famous buildings.

It was designed by the famed Georgian architect, James Gandon in 1790 for John Dawson, the first Earl of Portarlington. It was built in the style of the Custom House in Dublin also designed by Gandon.

Construction began in 1790. Emo is one of the few houses to have been designed by Gandon, others include Roslyn Park, Sandymount and Abbeville, Charles Haughey’s former home in Kinsealy.Gandon was also responsible for the nearby Coolbanagher Church, the only ecclesiastical structure he was associated with.
Emo Court had many owners throughout its history. It ceased to be the Irish residence of Lord Portarlington in 1915. In 1929, it, along with about 60 acres of the demesne, was taken over by the Jesuit Order. The Jesuits spent years here, until they sold the property to Major Chomeley-Harrison, a London stockbroker by profession. He spent years and huge resources restoring the property, under the supervision of Sir Albert Richardson and Partners of London. The gardens and lake at Emo were also restored.
Major Chomeley-Harrison presented the entire property to the State in 1994, with President Mary Robinson in attendance at Emo for the occasion. The only provison he sought was that he could reside there until his death.

Emo Court is now managed by the Office of Public Works and is open to visitors.

Access to the house is by guided tour only, and these are available hourly.
For further information, check out the following link:
www.heritageireland.ie/en/midlands-eastcoast/emocourt/