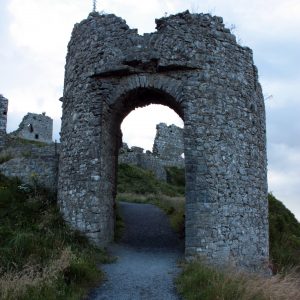 The Rock of Dunamase in County Laois is a very
prominent outcrop. Standing at over 45 metres in height, the outcrop with its castle ruins totally dominates the surrounding countryside. Although the rock is said to be drawn on a map by Greek cartographer Ptolemy under the name “Dunum” in the 2nd century, there is no archaeological evidence to support the theory that Dunum is Dunamase. Dunamase started as an early christian dun known as Dun Masc “The Fort of Masc”. The earliest historical reference to Dunamas is in the annals of the four masters where it states that Dun Masc was plundered by the vikings in 834 AD and the abbot of Terryglass was killed.

When the Normans arrived in Ireland during the 12th century the rock was refortified with the great hall and the earlier gate tower survived from this period. The castle is believed to have been in the hands of Dermot McMurrough Kavanagh before being passed to Richard fitz Gilbert de Clare (Strongbow) and then onto his son-in-law William Marshall. At sometime later there was a rebuild of the main gate and the inner and outer barbicans were added. The castle fell into a slow decline up to the middle of the 17th century when it is believed to have been finally finished as a stronghold by Cromwellian forces.
Although the state of preservation of the castle is poor the Rock of Dunamase is a site well worth visiting.