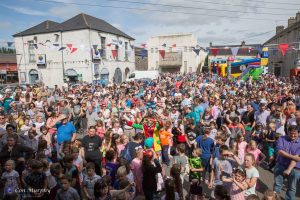 The town’s Junior Chamber Chapter were the originators of the festival which celebrates the town’s Huguenot connections. During the summer of l976 they got together to plan for the festival and after 14 months it all came together with the launch of the festival in Jury’s Hotel in Dublin. September 1977 saw the first “Festival Francais” open from Friday 30th September to Sunday 2nd October 1977.

Local and regional support was sought with more than 30 local organisations involved. Considerable sponsorship was obtained from many of the town’s traders and business concerns with the hope to balance the budget through the proceeds from the marquee dancing. A patron’s fund was also set up. Total cost of first festival was £3,500.00. 34 separate events were planned for the weekend.

Of particular note were the Jewel of Arlington Contest and the Escargot (snail) Eating Contest. The Marc Quinquandon Perpetual Memorial Cup was the title of the trophy presented for the Championnat National Du Manger D’Escargots (snail eating) contest. French Window Display Competition was presented on the opening night by the Cultural Counsellor of the French
Embassy, M. Marc Raynaud.

The French Festival was nominated and won one of the coveted awards of tourism, the U.D.T. Endeavour Award for enthusiasm, vigour and originality for community effort. Their work was justifiably rewarded. Today the Festival Francais dé Portarlington is a now family weekend-long event that takes place on Bastille Day, with a wide range of entertainment to suit all.

The wonderful success of the Festival is mostly down to the fantastic grant help the committee get from LAOIS PARTNERSHIP COMPANY without whom we would not be able to put on the Festival .